Zaiko (ザイコー Zaikō) also known as Xicor is Goku's genetically created cloned son. He is half-Shinjin, as his mother is the West Supreme Kai. He is the main antagonist of Toyble's Dragon Ball Af doujinshi.

It is stated on the Zaiko is the character creation by Toyble (Toyotaro) in 2006 that Zaiko is based from the Goku Super Saiyan 9-type character of transformation creation by DRAGONBALL-FP.NET in August 19, 2004.

Zaiko and his mother, the West Supreme Kai, arrive on Earth in two space pods. Immediatly after landing Xicor comes into contanct with Goten and fires a Ki blast at him. The blast is so powerful that Goten is almost killed. After sensing the blast, Gohan, Vegeta, and Trunks rush to battle. After questioning him Zaiko reveals himself to be son of Goku which shocks Z-Fighters.After this, to display his immense power Zaiko releases a tremendous Ki wave destroyed a big chunk of the planet Earth!

Kibito Kai watching events unfold teleports to Earth in order to seal Zaiko into the Z-Sword. Kibito Kai heals Gohan and requests him to keep Zaiko distracted long enough so he can fulfill his mission. In a final attempt to seal Zaiko all three heroes fire thier most powerful blasts; initially Zaiko seems to be strugling against their combined powers, but he mangaes to push the blast away. Despite the attack failing it buys enough time for Kibito Kai to begin the sealing process. But, before he has enough time finish the seal, West Supreme Kai intervenes saving Zaiko.

With all their Ki depleted Zaiko feels he has won, until Gohan manages to pick up the Z-Sword to try and attack him. This buys enough time for Dende, guardian of Earth, to heal Kibito Kai; This gives Kibito Kai enough energy to seal Zaiko with the Z-Sword.

Shortly after getting getting sealed Zaiko's mother, West Supreme Kai, tries to unseal him. She is ultimately killed when Kibito Kai makes the ultimate sacrafice; a kamikazee attack.

Although Kibito Kai managed to seal Zaiko, the seal wasn't done properly meaning it would automatically un-do itself in exactly one month.

After a months time Zaiko is realesed from the sword to encounter Vegeta, Trunks, and Krillin. Zaiko says that the Z-Fighters will pay when Vegeta cockily challenges him to fight. Zaiko laughs at Vegeta saying he will easily kill him. When Zaiko attempts to land a blow to Vegeta, to Zaiko's surprise, Vegeta easily dodges. Vegeta then starts pummeling Zaiko by alternating his transformations from speed type (super saiyan 2, super saiyan 3), to stamina type (golden great ape, super saiyan 4), and to strength type (ascended super saiyan, ultra super saiyan, legendary super saiyan). After thoroughly getting thrashed, Zaiko figures out what Vegeta is up to and he laughs. This is of great shock to the heroes.

Zaiko then explains that he is unbeatable and the perfect specimen. He asks Vegeta wheteher he is in the strength, speed, or stamina type. After he states that he is at the pinnacle of all types combined into one; his so called "perfect type". Zaiko says that right now he is in control, but if he transformed everything would be destroyed. Zaiko then asks permission from his mother to transform. After learning that his mother was killed, an enraged Zaiko's powers up stating the only one he was trying to protect was gone. His power is so great that it blows away Vegeta, Trunks, and Krillin. After transforming Zaiko beats Vegeta to the verge of death stating that he was now, in their words a super saiyan 5.

Trunks tranforms into a super saiyan 3 in order to engage in battle with Zaiko. Before Zaiko can finish them up Broly does a sneak attack pushing him away. Also joining into the battle Majuub and Tiencha make an appearance. Majuub directs the saiyans to leave to the lookout in order to revive Goku. Zaiko laughs saying there will be no escape to which Majuub replies that they have a plan. Then, despite Krillins warning, Tiencha tries to attack Zaiko failing misrebly as Zaiko swats him aside like a fly. When Zaiko goes face-to-face with Majuub he transfroms back to his base form. Majuub then comments saying that his transformation doesn't last for long. Zaiko smile saying his current power is sufficient to defeat him.

Zaiko has light skin, white hair with two black horns. He has red lines under his eyes and grey eyes. He wears green clothes with blue shoes. He looks similar to Goku wearing a similar gi but instead with a green color scheme. 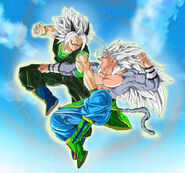 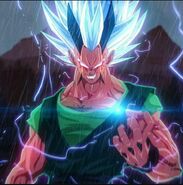 Super Saiyan 5 Zaiko
Add a photo to this gallery
Retrieved from "https://dbaf.fandom.com/wiki/Zaiko?oldid=5712"
Community content is available under CC-BY-SA unless otherwise noted.